CEF has supported the Fairlie family of Monmouth, Wales as part of BBC’s DIY SOS programme with products supplied from its Cwmbran branch. The BBC sent out an appeal for local tradespeople and suppliers around Monmouth to offer their products, services and time to help on its latest project, and the CEF team of Paul Fieldsend, Simon Evans, Darren Humphreys, Richard Lloyd and Gareth Handy were there to answer the call.

Branch Manager Paul Fieldsend says: “We are really pleased that we were able to supply so much of the electrical equipment that was needed on the project. Our branch was delivering to the site even after hours to help ensure that work could be completed within its nine-day deadline.”

The DIY SOS team is well-known to BBC viewers, as Nick Knowles and his crew regularly set to work to improve the homes of families in need of help around the UK. The Monmouth project focused on Charlotte Fairlie and her husband Rob.

Charlotte suffered a stroke after giving birth to her twin sons, but she is now back at home and learning to walk again, cared for full-time by Rob and her sister. Unfortunately, their house was too small for her essential physiotherapy needs.

The DIY SOS team stepped in with the original aim of adding a two-storey rear extension to the two-bedroom house. However, it turned out to be a much bigger project than anticipated and all will be revealed when the episode comes out in six months time. This new space will allow Charlotte to have treatment at home, while also creating space for their growing boys.

Paul Fieldsend says: “When the day of the big reveal arrived, CEF Cwmbran had donated around £3,000 of kit including cabling, accessories, lighting and fans. We even supplied armoured cabling to be used to take electricity out to the garden and shed.”

Paul adds: “The show really doesn’t work without local companies and people pulling together. I was so pleased that one member of the DIY SOS team, Billy Byrne, actually came down to our branch to say thanks for all our help. It was great to be part of this worthwhile project.”

To keep up to date with news from City Electrical Factors, follow us on Twitter on https://twitter.com/cefonline 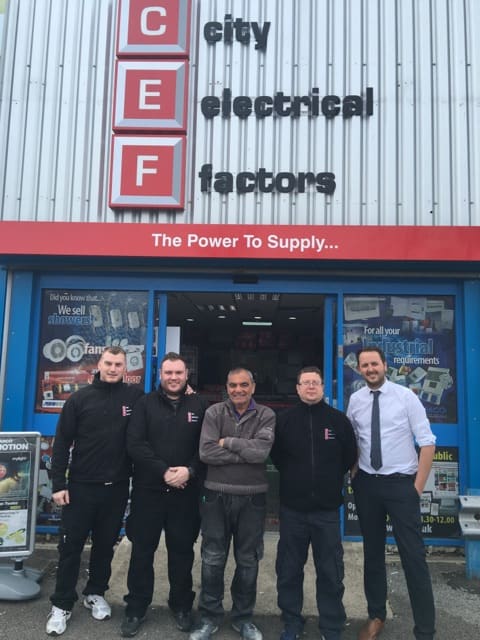